More than 30 thousand hectares of forest were lost!

According to records from Peru’s National Forestry and Wildlife Service (SERFOPR), until the end of December 2016, illegal miners have deforested 30,000 hectares of the Amazon rainforest in the buffer zone of the Tambopata National Reserve (Madre de Dios region), in Peru. What once was the habitat for a vast array of plants and animals, is now a cemetery of logs and mud. 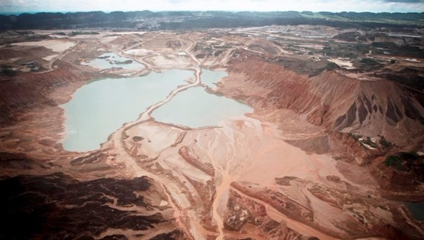 The degradation of the Peruvian Amazon by illegal miners is quite serious.

This figure increases if we consider illegal activities in the jungle area of Puno, Cusco, San Martin and Amazonas.

Illegal miners have settled in the Tambopata area for 30 years, making deforestation a lucrative business by utilizing sophisticated machinery. They first clear the forest and then dig to extract gold using mercury, which they then sell in Puno, Lima or the neighbouring country of Bolivia. They even legalize the activity by selling their gold to legal miners in Peru. It is estimated that this activity produces 16 tonnes of gold per year.

The illegal mining sector has the necessary means and organization; it doesn’t comply with the law (State controls). This activity is also carried out in the regions of Puno, Arequipa, Ica (Nazca), La Libertad and Piura (where in 2005, the mining company Manhattan Minerals of Canada decided not to work on the Tambogrande mine site due to the opposition by the indigenous people. Today, most of those opponents practice informal artisanal mining extracting gold without following environmental and security standards).

Many illegal miners, despite having the economic means to formalize their activities, decide not to do it, since they would rather avoid paying taxes and don’t comply with the environmental and social controls carried out by the State. Their operations are developed in very remote areas and their activities are mixed with the presence of brothels, bars and delinquency. The recruitment of minors for brothel activities is another great social problem that has to be addressed. It is estimated that there are about 400 teenagers being exploited in the so-called “prostibares”.

Another problem is related to the threat to the health of workers and people living in small villages surrounding mining areas, due to the absorption of mercury, arsenic and lead.

Aerial view showing how deforestation has altered the Amazon.

In addition, waste obtained from these heavy metals is thrown into the rivers, which is very concerning since the Amazonian population bases its diet on fish. Sixty per cent of fish that are consumed in Madre de Dios, have a mercury content above the permissible limits indicated by the World Health Organization.

The Carnegie Institute study also evaluated the residents of the city of Puerto Maldonado, where 78 percent of adults showed mercury levels in their hair three times the permitted limits.

The State does little to repress this illegal activity that is severely damaging one of the lungs of the world, poisoning its soil and generating social issues. 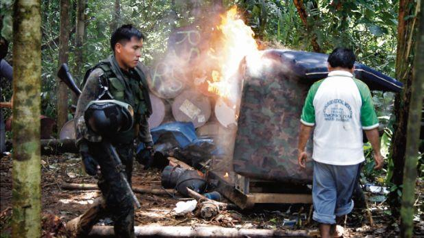 The police destroy the machinery used by illegal miners in the Amazon rainforest of Peru.

The government carries out some actions to combat this activity, but due to the lack of logistical and economic resources, it has not managed to halt it. When illegal mining areas are found, police destroy their machinery and equipment, but almost no one is arrested. However, the names of the “gold czars” that have yearly incomes of millions of dollars are well known, but that money is managed clandestinely, and is not part of the banking system. The economic power they have allows them to finance strikes against the government, opposing formalization.

We call the attention of world organizations to support to combat the deforestation of the Amazon, which is one of the few places in the world that is still home to unique wildlife and flora. It seems as if the lung of the world is doomed to disappear.